Eating out for lunch or dinner in America is relatively easy for coeliacs. In New Zealand, nearly all restaurants will do gluten free meals on request, with many labelling which items are or can be made gluten free. In America, I found a much smaller proportion of restaurants labelled gluten free options. I also ran into establishments that simply had nothing available. As a general rule, good quality restaurants easily catered to my needs. Restaurant chains such as Applebees had folders with dietary information about their menus including gluten status. Fast food outlets such as Taco Bell had absolutely nothing on offer. I struggled to find much in the way of cafes over there as the market seems to be dominated by Starbucks or state-wide chains (reminiscent of Robert Harris).

So what sorts of GF foods were available?

Starbucks stocked fruit salads, GF nut bars and a marshmallow rice bubble thing. Restaurants typically had at least a couple of GF menu items though in many cases these were salads with nothing on the main menu available gluten free. Luckily, American meals are much larger than those in New Zealand, so even though some establishments could only offer me a salad, it was usually still a fairly filling meal. 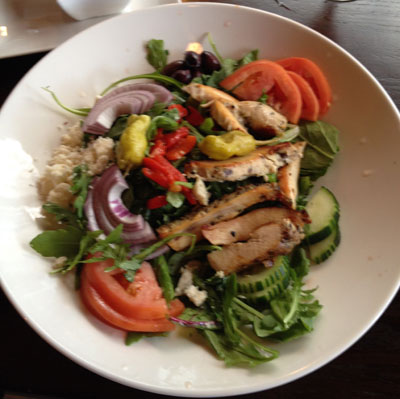 Chicken salad at a cafe in downtown Charlotte, North Carolina.

But not all waiters were very switched on. I have always been told by Americans that tips are a great incentive for good service but my experiences travelling to America several times over the last 3 years have been that tips are expected and are often much more closely linked to the menu prices than the service because many people tip a relatively fixed percentage of the bill. My impression was that many waiters were eager to rush off with your order as fast as possible to get it going in the kitchen than to stop & understand the importance of your questions about gluten. I often had to specifically ask for a waiter to write down gluten free on their pad. 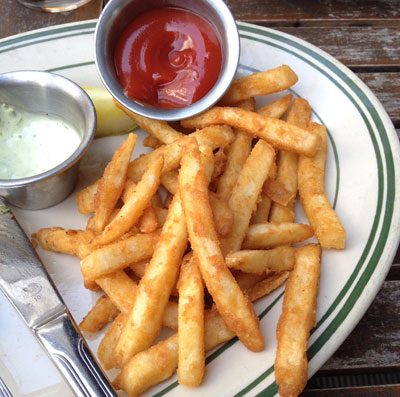 At this restaurant in Charlotte, the stir fry was one of only two items marked as "can be made GF" but the waiter did not make a note despite me mentioning gluten 3 times while ordering. I wasn't brave enough to eat the chips that came with it which appeared to be battered.

As mentioned previously, while some places don't cater at all for coeliacs, many do. Here are just a small selection of meals that I had at restaurants that catered very well for us. 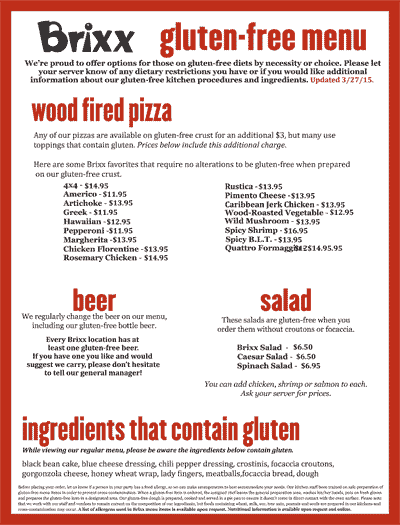 Brixx in Charlotte not only have a special GF menu but also give heaps of reassuring information about their GF procedures. Click to view larger. 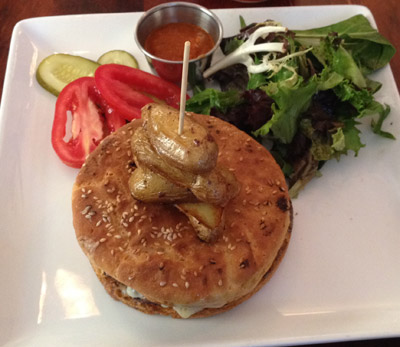 An amazing GF gourmet burger at the Wild Goat Bistro in Petaluma, California. It was wonderful.

A BLT at the Hilton Hotel in Charlotte, North Carolina. In the background is my colleague's non-GF version with the fruit side while I had the vege.

One final observation: Americans seem to love broccoli. Whenever ordering a steak, it either comes with nothing else, or with garlic mash and broccoli. If a restaurant offers you salad or vegetables, the vegetables are always broccoli. It turns out that not all restaurants cook broccoli very well. Some was lovely, some wasn't. That I even noticed highlights how many times it was served to me.

I've so far only talked about restaurants and eating out. As I mentioned in my previous blog post, motels in America don't tend to have adequate kitchen facilities. I was also travelling on business so any extra time I could spend at work rather than in a kitchen was worth far more than the cost of eating out. However, I have found that Wholefoods is an excellent supermarket for coeliacs to visit, with a massive gluten free section. It is known for its organic foods but doesn't exclusively sell organics and niche products. It is a high end supermarket where you will find equivalents for pretty much anything you can buy at New World.