Several of you indicated through our Facebook page that you would be interested in hearing about my two recent experiences eating gluten free overseas. This is the first in a short series of blog posts about my experiences on work trips to China and America. For the first post, I thought I'd start with my airline experiences. Airline food has a reputation for being poor, but as you'll see, even within one airline I received food that was anywhere from inedible to delicious.

For both trips, I travelled with Air New Zealand economy class on the way there and was lucky enough to return on premium economy (the first time due to economy being sold out because of the Cricket world cup, and the second by redeeming a recognition upgrade). I will also be flying with Qantas (economy) later in the year so will be able to compare in a future post. 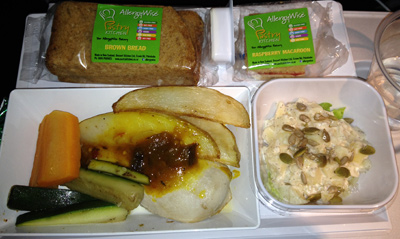 The hot meal and potato salad shown above were simple and pleasant. Unfortunately the bread (mine were both crusts) was tasteless, dry and rubbery. I didn't eat the dessert, as I sank my teeth into it they nearly bounced off. It was how I'd imagine biting into a squash ball might feel. I don't doubt that the bread and dessert products are probably quite pleasant at ground level, but in this experience at cruising altitude they were horrible. 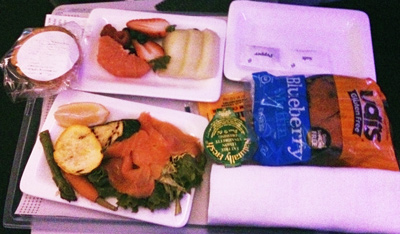 Appetiser, roll and dessert in premium economy SFO to AKL.


In premium economy, an appetiser, roll and dessert are served as shown above. Once you've finished the appetiser, a hot main is brought to you. From Hong Kong, the main was a very pleasant steamed white fish, while from SFO it was a salmon steak. The dessert from SFO consisted of both a fruit salad and a very nice muffin (which I saved for breakfast).

Breakfast
Near the end of the flight, breakfast is served. Breakfast on premium economy and economy are reasonably similar. A fruit salad, bread roll and sometimes a rice cake or yoghurt are provided. On all of the flights the hot main was an omelette with mushrooms and tomatoes. Spinach, capsicum and potatoes also featured on some flights. I really don't like eggs, so always had a muffin or gluten free nut bar in my carry on luggage for breakfast. 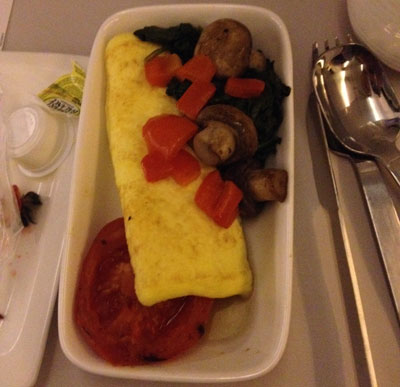 The hot breakfast in premium economy SFO to AKL.

So that was my experience of gluten free meals on Air New Zealand. As this is very much a food centric website, I haven't really touched on the rest of the experience, but as with most of my flights on Air New Zealand, the staff on board were absolutely excellent: friendly and always smiling.

Check back soon for the next instalment in this series: "Breakfast in America".